Space Battleship Yamato Parody (Yuki Mori)
A female crew gets kidnapped by an enemy battleship. Alien captain asks her to marry him. But thinking of her boyfriend, she refuses him. In return the captain makes her to be a sex slave to spare the life of her boyfriend. The cuckolding humiliation continues..
MP4 39min 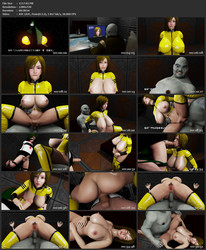